Baby Mustard restaurant specialising in local produce with its own herb and produce garden, in Tra Que village outside Hoi An, Vietnam

Having recently been to Vietnam via Hong Kong to stay with a friend who has been working in Hoi An, I was once again struck by the range of uses to which bamboo can be put and at the other end of the sustainability scale, the Asian obsession with air conditioning.

One of our day trips was to Baby Mustard, a restaurant that specialises in local produce.  Open sided bamboo pavilions set amidst the Tra Que Vegetable Village, a market gardening and prawn farming settlement in the delta outside of Hoi An which has become a tourist attraction.  Tourists wander through the neatly laid out vegetable gardens or can cycle along the embankment separating the rice paddies to reach the village. The restaurant has its own herb and produce garden.

A reminder of Colonial Hong Kong, a Tong Lau apartment, a distinctive apartment form that originated in Guangdong province as an evolution from the typical Asian shop-house form.

En route to Da Nang, I stopped off in Hong Kong, which I had not visited for 20 years. Colonial Hong Kong has largely vanished, and so has interwar Hong Kong.  The pressure of development is such in Hong Kong that it is becoming harder and harder to find examples of residential architecture, other than the multi storey flat buildings. Fortunately there is now a growing interest in saving surviving examples of typical twentieth century building stock that is emblematic of Hong Kong. Tong Lau, the Cantonese name for distinctive building form that emerged in Guangdong province, feature a ground floor shop and apartments on each of the three to five upper floors. This higher density form evolved from the more typical shop house associated with Asian cities like Singapore. The form began to disappear in the 1960s when the restrictions were repealed and multi-storey housing blocks became the norm. 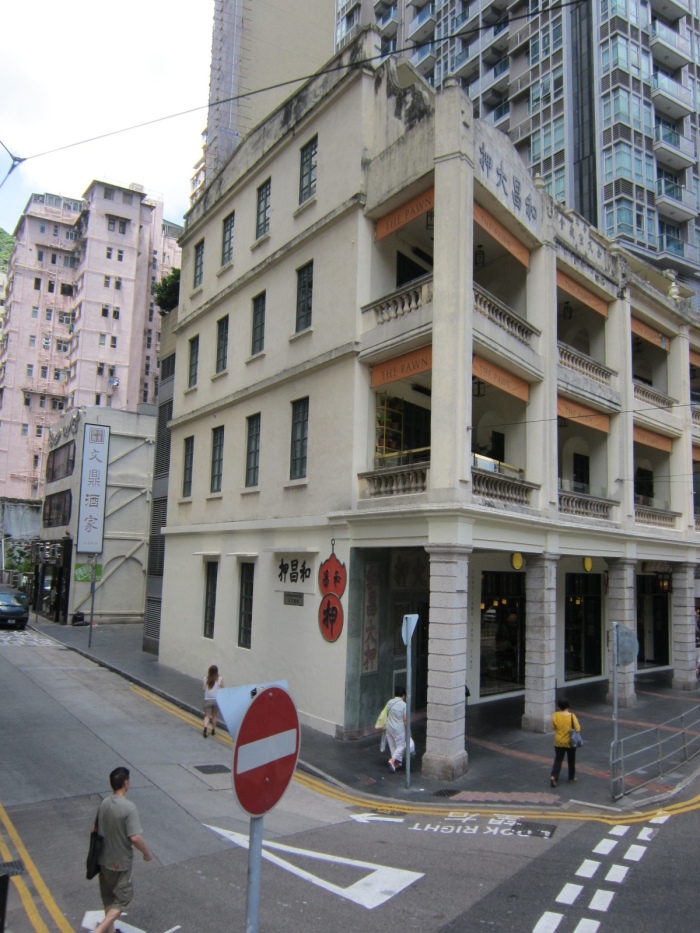 The Pawn cocktail bar, an example of a Tong Lau,apartment with a shop on the ground floor and apartments above, usually with balconies.

In their original form the Tong Lau apartments usually had balconies, which can still be experienced at the Pawn cocktail bar, a converted row of Tong Lau in Wan Chai.   Advocacy to save the form has resulted not only in the type now becoming recognisable to the wider community and to visitors, but has led to the buildings being selected for rehabilitation by the Housing Authority and by individual designers.  The contrast between the balconies and terraces of the Tong Lau and the ubiquitous high rise apartments with thousands of individual air conditioning units marks a contrast in responses to climate (or in the case of the towers, a lack of response). This city, which has some of the highest densities on the planet, probably also has the highest desity of individual airconditioning units, there are thousands and thousands of them. Tower blocks in Hong Kong are often built with an external shelf to put the individual air conditioning unit.

My overriding memory of the city from my visit twenty years ago and my visit this year is of street facades with numerous air conditioning units.  There must be a better solution.